Bayern’s All Time Greats – A Look Back at the Captains

on: September 04, 2016In: Hall of Fame, NewsNo Comments
Print Email

With ex-Bayern fan favourite Bastian Schweinsteiger announcing his retirement from international football and Manuel Neuer taking his place as German captain, Stuart Telford has taken a trip back in time, counting down Bayern Munich’s top 5 most influential leaders ever. 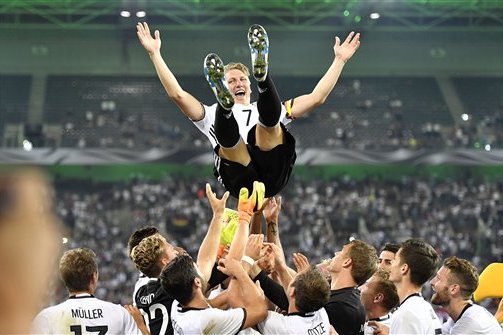 Bayern have contributed greatly into the talented German national side during their successes over the years, particularly when it comes to captaincy:

The most successful club in German football history, Bayern have contributed an abundance of leaders to the national team. Of the seven major honours Germany have won—four FIFA World Cups, three UEFA European Championships—all but two triumphs were captained by Bayern players past or present. Via bleacherreport.com

With the emotional farewell to such a brilliant servant of German football the other night, it seems a perfect time to reflect on some of the all time greats that have championed the Bavarian’s to glory over the years.

To find out who made the list, Check out Telford’s article here: Bayern Munich Captains: The Bavarians’ 5 Most Influential Leaders | Bleacher Report