Thiago was unfortunately injured during Bayern Munich’s winter training camp over the course of December and January, rendering him out of action as a starting player for Bayern’s first couple of matches back following the break.

Thiago stats per postion this season:

His absences has been rather notable too, with Bayern having been yet to impress in any of their games of 2017 thus far, having only managed a last minute winner against SC Freiburg, a 1 goal victory against Werder Bremen, and most lately, a 1-1 draw against Schalke at the Allianz-Arena. This means that Bayern are not only yet to keep a clean sheet in 2017, but have also only had narrow victories or laboured draws, something that Ancelotti is slightly concerned with:

“We were not compact enough. It’s about team work. I’m sure we will work together against Wolfsburg.

“You can compare Wolfsburg with Schalke. Things aren’t working so well – they’re not so good in terms of the table.

“They have good players. I think they’ll come to play defensively and then counterattack. We’ll have to put all our effort out onto the pitch.

“We’ve been working hard lately and maybe we didn’t deliver what we’re capable of in the last three games.

“We’ve focused on preparing the players for difficult spells.” Via goal.com 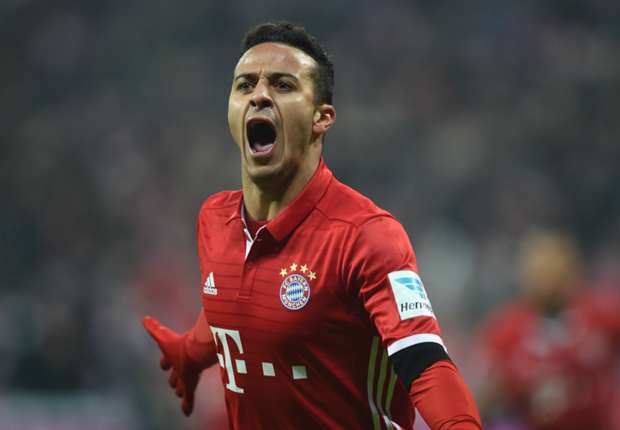 With this in mind, and with Thiago having been such a fundamental player to the side for Ancelotti this season, the player will be a very welcome return. However, with Bayern’s next match being their DFB-Pokal game against Wolfsburg on Tuesday night, many would have thought the player may not yet feature and be saved for the league where Bayern will be taking on FC Ingolstadt at the weekend. But it seems Ancelotti has decided to call upon the Spaniard, and he will both be available and a welcomed returnee:

“Thiago can help us with his quality. He is ready and he can play 90 minutes. He’ll be in the starting line-up.

“Kimmich trained today [Monday], he is fit and has no more problems. All the other players are in good shape. They’ve recovered well.” Via goal.com

Lets hope that Bayern can do the business on the night, as although the league really is the main priority, it would be nice to have a cup run as well this season as always.