Thiago has been receiving a signficant amount of praise this season, as no longer are people questioning his ability by claiming that he is yet to reach his potential. Instead, the Spaniard is being noted as a key man for one of the best sides in Europe, as his contributions to the side have been some of the best in whole Bayern squad that as a collective have have been under performing this season.

As a result, many of Europe’s top sides have turned their attentions to the player, and the likes of Manchester City where Thiago’s former manager Pep Guardiola is currently employed, as well as his former club Barcelona, are both reported to have been keeping a keen eye on the midfielder. 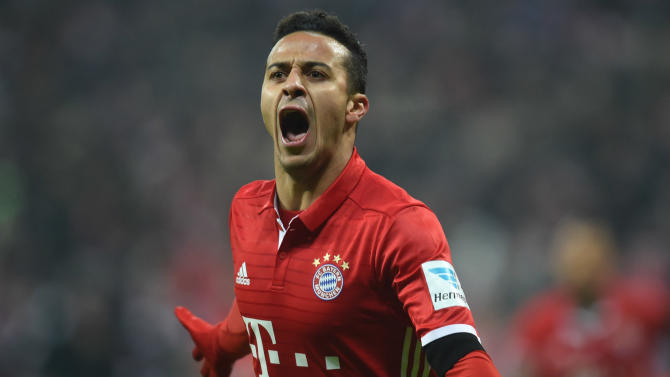 However, in the face of this, Thiago’s father and agent Mazinho has revealed that the player has become a settled figure at the club over the past 3 years, and has no intentions of leaving Bayern for new endeavours anytime soon:

“He is feeling incredibly comfortable in Munich.

“I think, he will stay for a long time at Bayern. The club is excellently run and gives you a familiar feeling. Furthermore the officials have always been fair. I hope he can stay here for many years.

“Players from big clubs always will have offers from other big clubs. Not only from England but also from Spain or Italy.

“But you have to feel comfortable where you are. Thiago is [comfortable] and for that reason we don’t think about anything other than about Bayern.” Via uk.sports.yahoo.com

With Thiago having really found his feet under Ancelotti, having often pushed the likes of Thomas Muller, Renato Sanches and Joshua Kimmich all out of the team for a significant majority of the season, the player really is shaping up to be one of Europe’s best midfielders at the moment.

With that in mind, we can be happy that it seems he is almost certain to stay in Munich, as if he keeps up his current form over the next few seasons then he can be a key player in helping Bayern to really kick on in all competitions and continue to notch up silverware for the history of the side.